At the time of our acquisition, Mellody Farm still had the historic estate entry gates and gatehouse. In 1999, Lake Forest Open Lands renovated the entire gatehouse complex and renamed it the Lockhart Family Nature Center, Lake Forest's first nature center.

For years at Mellody Farm, an inconspicuous wetland lay tucked away in the eastern part of the preserve. After the spring rains each year, chorus frogs were attracted to its fishless water to breed and lay their eggs. But the ephemeral pool would dry up before the chorus frogs could complete their metamorphosis from tadpole to adult. In 2005 this wetland underwent a major restoration: it has been expanded and made deeper, and several limestone perching rocks have been installed.  Native species have been planted, including swamp white oaks, sedges and over fifteen different kinds of flowering plants.

Patrick’s Puddle, as the wetland is named, provide younger children with a wetland teaching area close to the Lockhart Family Nature Center than the one they had been using. The rocks make it possible for children to get very close to the water, where they can be surrounded by and observe a wetland habitat teeming with life. Funding for the restoration was donated by Joan McGuinn and many friends in memory of Joan’s son Patrick. Joan felt this project would be a wonderful tribute to Patrick’s interest in and strong connection to the natural world. She herself, along with many of Patrick’s friends, assisted in the hands-on restoration work.

At this preserve citizen scientists monitor frog and butterfly populations. For information on our monitoring opportunities or to volunteer click here. 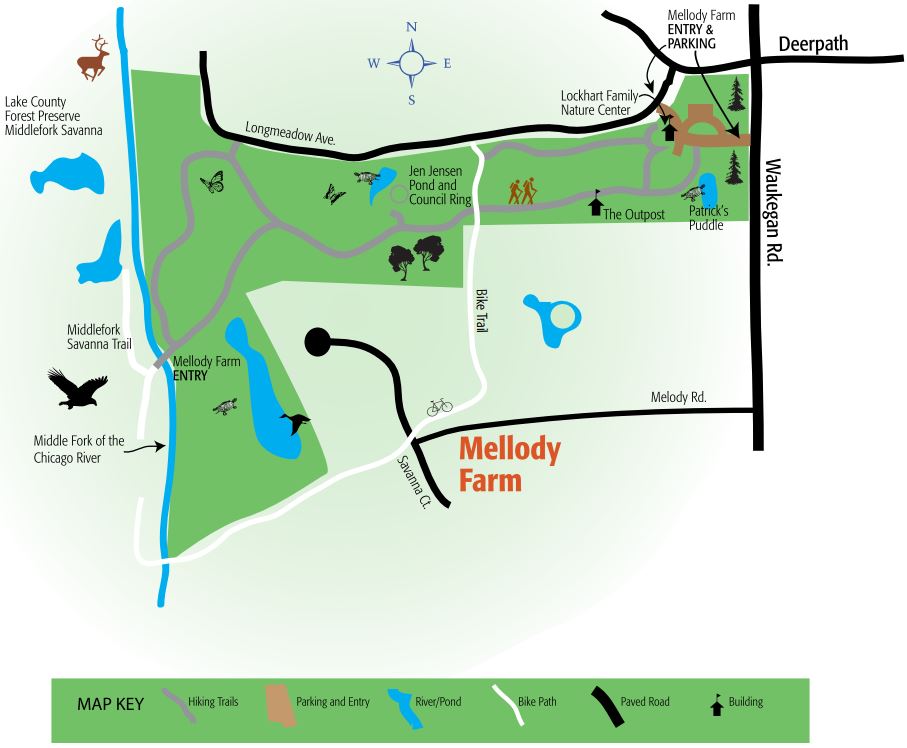 The entrance to Mellody Farm Nature Preserve is located at the south west corner of Deerpath and Waukegan Road (350 North Waukegan Road). Entrance is 200 yards south of the intersection at the Conservation Campus sign.

The Lockhart Family Nature Center was originally the gatehouse of J. Ogden Armour's Mellody Farm. This lavish 1,000 acre estate took four years and $10 million to construct and was finished in 1909. The Italian Renaissance gatehouse and the estate home (now Lake Forest Academy) were designed by architect Arthur Huen. Prior to working almost exclusively in the revivalist styles, Huen spent several years in the Prairie School alongside Frank Lloyd Wright and Dwight Perkins. Ogden Armour also retained two of the brightest and best-known landscape architects of the time, Ossian Simmonds and Jens Jensen. Their design included both formal gardens and more naturalized elements such as the Jens Jensen pond. Remnants of Jensen's design including the pond's teardrop shape, the eastern red cedar trees and the stone retaining wall are still evident today. In 1998, Lake Forest Open Lands carefully restored the Jensen pond, preserving both the important cultural and ecological characteristics of this wetland. In 1999, the Steiner family donated a Jens Jensen council ring from their home on Green Bay Road. The council ring now overlooks our Jens Jensen pond and is used for educational programs.

Ogden Armour was the son of the meatpacking magnate Philip Danforth Armour. After his father's death at the turn of the century, Ogden inherited the family business and soon amassed one of the greatest fortunes in America. In the mid-1920s, after an unsuccessful attempt to corner the wheat market, the Armours fell into bankruptcy and lost nearly everything including the Mellody Farm Estate. In 1947 Lake Forest Academy purchased the estate house, which now serves as its central building. The gatehouse and surrounding land remained in private ownership until Lake Forest Open Lands purchased the 50-acre property in 1994 with the intention of renovating the gatehouse into a community environmental learning center and restoring the lands as a nature preserve.

The beautiful and historic Middlefork valley landscape that first attracted the Armour Family nearly one hundred years ago is still largely intact in the 50-acre Mellody Farm Nature Preserve and the adjacent 514-acre Middlefork Savanna Forest Preserve. Just as visitors to this special place have done for thousands of years, one can still walk this land and experience the beauty and tranquility of the majestic, ancient oak groves, the rolling tallgrass prairies and the secluded wetlands.

The Lockhart Family Nature Center library is a wonderful resource for the community. Please stop in to look up the beautiful yellow and black warbler or leaf-like caterpillar cocoon you saw on a hike in one of Lake Forest Open Lands' preserves. Students working on a biology project, teachers creating new curricula, scout troop leaders planning outings, and gardeners looking for ideas on native plants for their backyard have all come to the nature center and found just what they needed in our library.